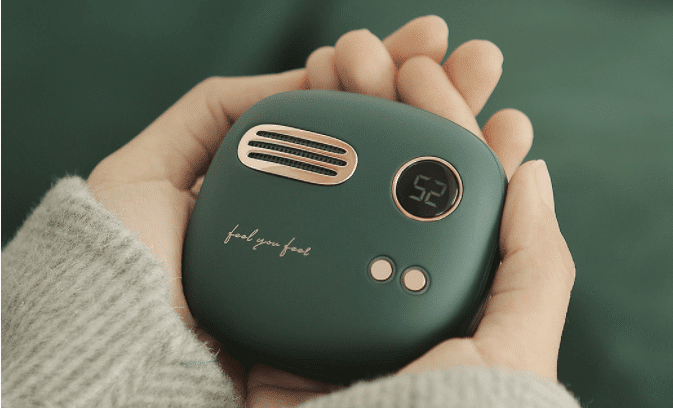 The same has been done by it by releasing all new Xiaomi portable power bank. This is not just a normal power bank it acts as a hand warmer also making it exciting to carry in hands in the winter season.

This small portable power bank looks really compact as well as cute. It comes with small retro design with hand warmers which can provide heating at a constant temperature of 52 degrees on both sides.

It is made of aluminum which makes it more durable and light-weight as well. Not only this Xiaomi also claims that the device is made up of multi-material composite technology making it fire resistant also.

Now talking about the physical appearance of the device, there are two buttons visible on the front side of the power bank.

Pressing the left button will activate the device and will display the remaining power of the device on the while the right button, on being pressed, activates the heating function.

Not only this you will be able to see the current temperature of the device also.

Xiaomi portable power bank can start heating within 5 seconds which can go up to 52 degrees once the heating function is activated.

Coming back to the power bank, we should keep in mind that this is a small one having a capacity of just 5000mAh making it useful for just emergencies.

Xiaomi has made the speaker by keeping safety in mind as it contains some of the advanced features also, like auto power off and overcharge protection.

It is made available in three colors as of now Green, Pink, and Red. All the three colors looks really nice and eye-catching.

Talking about price, it is listed for sale in China at a price of 138 yuan which roughly converts to $20.

Let’s hope it comes to India as soon as possible so that we can also get a closer look at the device. Until then you might be interested in some below news which is similar to this one.