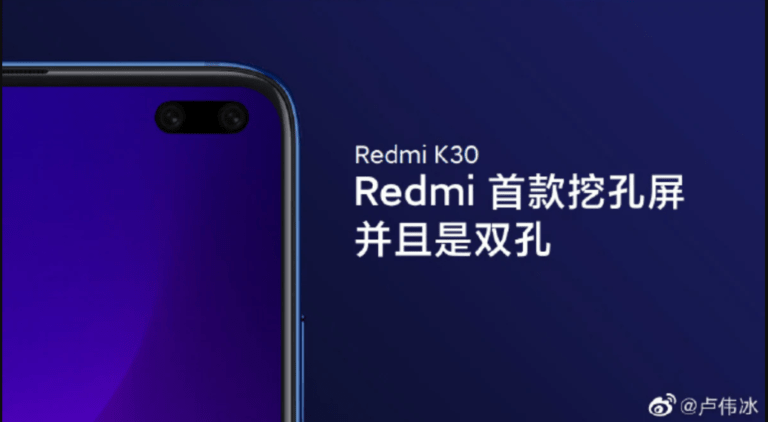 Redmi is a sub-brand of Xiaomi smartphones of which are very popular in India. Redmi K20 Pro was Redmi’s first flagship device and it became popular among the users.

Now according to some new renders rolling out, Redmi could launch Redmi K30 in December 2019 which could be the very first 5G smartphone from Redmi.

Redmi’s GM Lu Weibieng has already confirmed the existence of Redmi K30. He also confirmed that Redmi K30 will be having 5G support. Recently, some live images have been leaked which reveal some key specs about the Redmi K30.

These images give us a really good idea about the upcoming display of Redmi K30. Unlike Redmi K20, Redmi K30 will not have a pop-up camera. The images clearly show that Redmi K30 will have a punch-hole display. It will be a pill-shaped cutout.

The cutout will house the dual front camera. One will be the main sensor and the second sensor could be a wide-angle sensor for group selfies or a depth sensor for better front portrait shots. Now that’s all about the camera and cutout in the display.

But that’s not all what these images tell us. One of the images shows that the phone will have a 120Hz display. Now, here Xiaomi is not going with a 90Hz display but with a 120Hz display and that’s a very bold move.

Users can switch between the 60Hz or 120Hz refresh rate in order to save some battery. So the Redmi K30’s display is going to be very smooth and fluid and users are really going to enjoy it.

As we’ve discussed earlier, Redmi’s GM Lu Weibieng has already confirmed that in the upcoming Redmi K30 series smartphones we will get 5G support.

Here Weibieng didn’t mention anything about the K30 pro but we can expect that along with K30 we will definitely get to see K30 Pro.

So, day by day we are getting more and more information about the upcoming Redmi K30 series, so stay tuned for more of that.

Until then, these below news might also interest you.