LED TVs are getting economical with time. A budget LED TV today costs around 8-12K depending upon the brand and features that you choose. However, I would advise you to go for a smart TV for a small bump in price that is better at handling content of various formats and even lets you play games.

Excited? So Let’s Get Started.

The Mi TV 4A Horizon Edition brings a few minor changes from the yesteryear Mi TV 4A Pro. These much-needed changes make it usurp the Mi TV 4A Pro in a few aspects to make it one of the best smart TV under 15000. 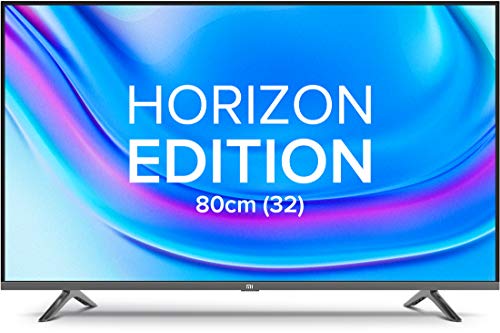 Mi TV 4A is identical to its predecessor in pretty much all the physical aspects except the new slim bezels that present a greater screen to body ratio. The TV and its stand are made up of plastic and weigh around 3.8 kilograms, making it a lightweight affair. It comes with 3 HDMI, 2 USB, Ethernet port, built-in Bluetooth, and WiFi for connectivity.

The Mi TV Pro is 32 inches in size and bears a 720P HD resolution which is fit for watching high-resolution videos. The bezels have shrunk significantly from the older model, making it an immersive experience to watch. I found the color temperatures to be slightly warm by default but after manually tweaking it, the overall picture quality was admissible.

The Mi TV 4A Horizon Edition is the only television to use android OS and their proprietary Patchwall launcher that offers a smooth transition to frequently watched applications, free love news channels, and all your popular streaming applications like Netflix, Disney Hotstar, Amazon Prime Video, and YouTube, to name a few. The TV boots up in less than 5 seconds and have a universal search feature embedded into Patchwall that enables you to search for content across all platforms in one go. The Android TV OS enables you to play games on your TV, provided you have a compatible gamepad.

The Mi TV 4A Horizon Edition comes with much-needed improvements even though the hardware components remain the same. It has bottom-firing 20 Watt speakers that are better tuned and therefore offers better sound quality. One thing that they could improve is including a mute button on the remote. It is an earnest request from my side.

OnePlus TV 32Y1 gives stiff competition to the Mi TV 4A Horizon Edition in some aspects which makes it a good choice among the best smart TV under 15000. The brand has two versions of the TV in which the 32 Inch one falls under the budget segment. 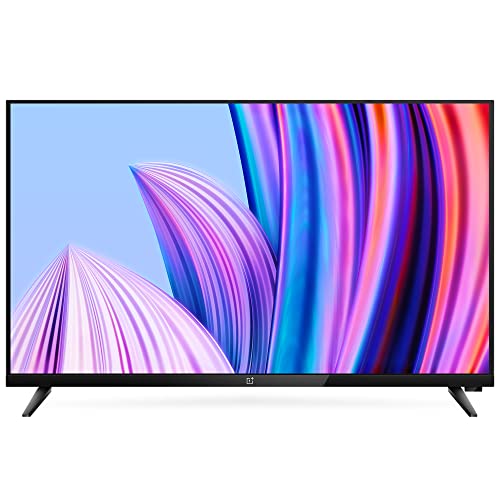 OnePlus TV 32Y1 is also an entirely plastic set with no visible metal components on any side. The absence of metal makes it lightweight to place on a table or mount on the wall. There are no physical buttons on the TV and it can be only operated by the included remote. It skips one HDMI port, making only two available ports on the TV. Also, there is an ethernet port for direct connectivity and two bottoms firing 20 Watt speakers with Dolby Audio.

The display of the OnePlus TV 32Y1 is the best on our list if you compare the bezels with any other TV. Yes, the Mi TV 4A Horizon Edition is similar in bezel size, but I felt the OnePlus TV 32Y1 offers the highest immersive experience. The display panel is a 720 pixel one, with the gamma engine and 93 percent DCI P3 color gamut.

OnePlus TV 32Y1 runs on Android 9.0 and also bundles some proprietary One Plus applications with it. I love the boot time of this TV as it is far better than the so much hyped quick boot feature of the Mi TV 4A Horizon Edition. The Android OS does not lag but the Oxygen Play could use an improvement. The Patchwall launcher is way ahead of all TV applications in terms of recommendations. You also get the OnePlus Connect application to directly pair and share screen via your One Plus smartphone. Google Play Store and all the popular streaming applications come bundled with the TV.

The boot time is impressive. I wonder why they didn’t brand it as a feature. Overall the color saturation is a bit more than I like and the sharpness in video quality in the Mi TV 4A Horizon Edition is a bit better. That can be adjusted but not to the point that it topples its competitors. They also shed an HDMI port, forcing users to buy an HDMI splitter if they have to attach a soundbar, Console, and a set-top box simultaneously.

OnePlus TV 32Y1 could do better in terms of the software experience and color sharpness.

The Realme Smart TV (32″) uses narrow bezels around its display with an all-plastic design that makes it weigh around 3.6 kilograms. I don’t find any weight disparity between the televisions and like most TVs, this can be easily wall mounted. There are abundant connectivity options both wired and wireless and it does not skip on an HDMI port like the OnePlus TV 32Y1.

Realme Smart TV (32″) bears an HD LED display with 1336*768 resolution. The bezels are increasingly thin but not as thin as compared to the OnePlus TV 32Y1. The TV uses chroma boost technology to lighten the pixels and has a wide viewing angle of 178 degrees.

Realme Smart TV (32″) runs on Android 9.0 with infrequent updates once or twice. It comes preloaded with all the popular video streaming applications such as Netflix, Disney Hotstar, Amazon prime video, etc. There is also a Chromecast feature built in to replicate your phone content on the screen. It has all the nifty features present in Android 9 TV OS but lacks a dedicated launcher like the Patchwall in Mi TV that is a little disappointing. You get a Google voice assistant button along with hotkeys for streaming applications on the remote.

Connectivity-wise there is not any problem with the Realme Smart TV (32″) as it has all the ports. The Chromecast is a little buggy and I hope they fox it with future updates. The applications load slower than the other Android TV which is a bit infuriating. However, the decent color production, 400 nits brightness, elaborate tv remote, and the loud 24 watt speakers make it a great choice as on the best smart TV under 15000.

Realme Smart TV (32″) is loud and doesn’t skimp on ports.

Onida might be a surprising name in the smart TV category because it doesn’t use the traditional android OS like the other TV on our list. It presents the users with another option in the form of Fire TV OS and for that reason, it is one of the best smart TV under 15000. 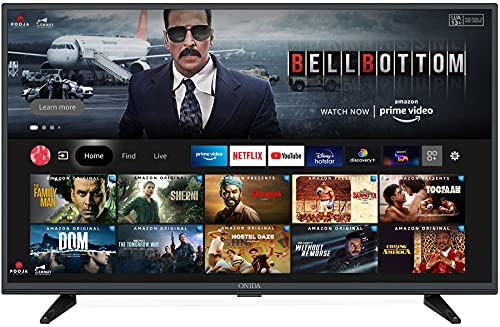 It is like the conventional LED TV and is all plastic if you are wondering. The TV includes a wall mount stand at this price point, which is the non-revolving one. It skips one USB port but includes a headphone jack. The TV comes with a Bluetooth remote that provides you with abundant options to alter settings and even cycle between channels from the set-top box.

The TV comes with an HD display that gives the maximum resolution output of 1336*768 pixels. The bezels are slim but nowhere near the Mi TV for comparison. It uses a bright LED panel that can produce sharp contrast at times. The viewing angle is 178 degrees while the peak brightness is capped at 300 nits.

The only TV to run Fire TV OS and executes it flawlessly. There is no visible input lag like you see in the Android OS in some TVs. It comes with Wifi 5 which is way faster in maintaining excellent speed than older Wi-Fi cards. Bring the Fire TV OS, you get Alexa integration out of the box and can give voice commands by speaking into the remote.

If Android OS on a TV bores you beyond limits, the Fire TV OS in the Onida is made for you. The display panel is good and you get a direct integration of multiple streaming applications. The Alexa integration is good and more responsive than the Google voice assistant on most smart TV. I would recommend this TV if it had an equally competent panel like the Mi TV mentioned in our list.

Onida Fire TV edition is a great option for users that do not like Android OS.

Kodak 32HDX7XPRO is another budget option for the best smart TV under 15000. The brand initially made non-smart TV until recently and switched to Android TV not long ago. Kodak 32HDX7XPRO comes with a mix of features that enables it to make our list. 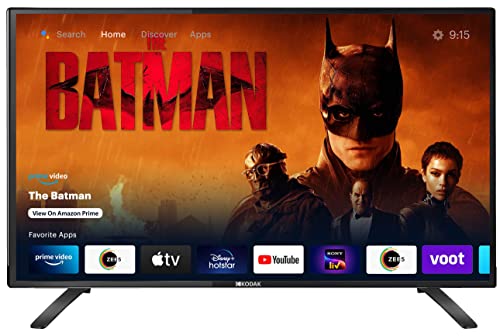 The TV is all plastic with almost all the ports that you can think of. The brand surely went slightly overboard with ports but it is good as you have a ton of options to choose from. It is on the heavier side and the entire unit weighs 5.8 kilograms, almost 30 percent more than that of the Mi TV. The TV comes with a minimalistic IR remote that features direct buttons for video streaming applications.

Kodak 32HDX7XPRO uses an LED panel with 720-pixel resolution. The TV appears slightly pixelated if you watch it very closely. Its bezels are on the narrow side but not on par with the OnePlus TV. The color production is a bit washed away in some high-quality videos. It can run YouTube in 1080 pixel resolution.

The TV comes with Android 9.0 and can a huge library of play store compatible applications. You can play a select few games if you like and the library is growing with each update. The TV lacks a dedicated button for Netflix and doesn’t currently support it out of the box. You can install it via an apk file bit that just brings a whole lot of compatibility issues and crashes. It also supports Google voice assistant and can be invoked by the hotkey present on the remote.

Kodak 32HDX7XPRO is a good option for the best smart TV under 15000 and is also the cheapest option among the lot. It could improve a bit on the optimization that induces lag while using the voice assistant or the Android applications.

Kodak 32HDX7XPRO is the cheapest yet a good smart TV in the budget segment.

Advertisement
Previous article
Best Headphones Under 1000 in India (May 2021)
Next article
[WhatsApp New Update] How you can use the ‘Dark Mode’ feature RIGHT NOW!

The 6 Best Keyboard for Programming [2021 Updated]

Our Top 5 Pick's (Comparison Table) A programmer has to...

7 Best Gaming Headphones Under 1000 in India

Our Top 5 Picks (Comparison Table) Budget laptops are in...