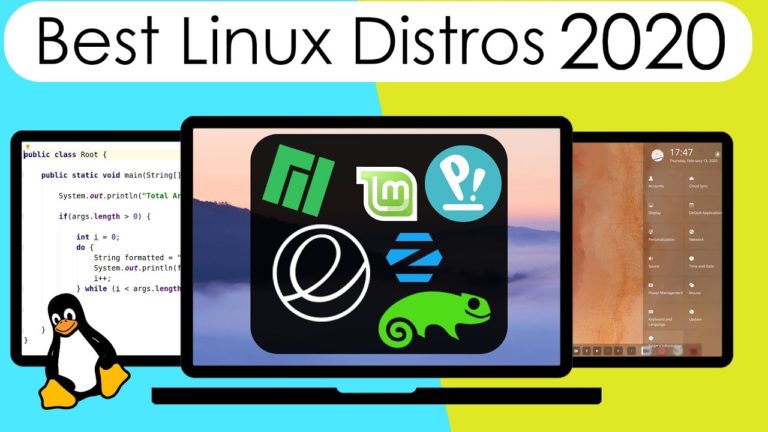 Are you in search of some best and beautiful Linux Distribution? There are tons of Linux Distros out there in the market which offers a wide variety of features, and this leads to confusion for many users.

Here We have mentioned some of the best Linux DISTRO that you should try in 2020.

Zorin OS is an alternative to windows and macOS which is designed to make your computer faster, more powerful & secure. It is one of the reﬁned, underrated Linux desktop OS which features a GNOME desktop environment.

Aesthetically, Zorin OS User interface is eye-pleasing. From beginners to high ends users, everyone will appreciate the UI of Zorin OS. It is super user-friendly and gives a level of comfort that you can’t even get on any desktop Linux. For naive Linux users, who have expertise in macOS and windows, will easily able to adapt the UI without the need of freaking out. Zorin OS is based on Debian Linux & uses an APT & Debian Package mechanism to install a software program.

Talking about features, Zorin OS looks quite similar to macOS which inherits some of the features you get to see in macOS like Dock, Launchpad, App Store, Desktop Pages & more. The all-new Dock is fully customizable, you can add as many apps as you want to the dock. When it comes to Core UI Features, ZORIN OS offers a dark theme, accent colours & desktop layouts. This way you can customize the UI as per your liking.

So, if you can’t afford ultimate, you can choose Core edition which uses a GNOME Desktop Environment, the one which I recommend the most & Lite edition is for the PC with bare minimum hardware. Overall, I would say ZORIN OS is a beautiful user-friendly Linux distribution that runs super smooth on your PC or laptop.

Next up we have, Elementary OS which reminds you the classic look of macOS. It’s simple, fast & powerful. It uses a Pantheon Desktop Environment which looks completely different from GNOME Desktop distros. The developers of this OS have tweaked a lot which gives a true feeling of classic macOS.

I mean, if you have used mountain lion, mavericks, you know what I meant to say. The UI looks stunning & impressive. It comes with a beautiful status bar on the top. The status bar holds a space to show time, applications platter & quick toggles.

At the bottom of the screen you get to see a retro macOS Dock. Now, one of the impressive things which I noticed in elementary OS is, The Hot Corners, you can simply hover your cursor at the edges of the screen to trigger any action. For example, if I hover my cursor to the bottom-right edge, then the OS triggers to show the applications panel.  Similarly, hovering at the bottom left, triggers the multitasking view, the place where you can see all apps running in the background.

Other features of the elementary OS include Toast Notiﬁcations, desktop pages & more. Overall, I would say, if you want a classic macOS look, then elementary OS is the One you must give it a shot. The Pantheon Desktop Environment & Debian package mechanism, in both, makes a unique ﬂavour of Linux to choose from others.

POPOS is developed by SYSTEM 76 which is based on Linux Ubuntu. It offers minimal features & most importantly it’s a lightweight Linux distro. Meaning, the Desktop feels buttery smooth. I think the most important thing about Pop OS isn’t the OS itself.

After all, the OS is more than a re-branded Ubuntu GNOME. What’s important here is that the Pop OS is developed by a PC manufacturer. You may be thinking, “so what?” But think about it, how many PC makers offer up their OS? The answer is two: Apple and Microsoft.

The fact that System76 has taken this approach to a desktop OS (Pop OS) is interesting. For now, Pop OS doesn’t feel much different from Ubuntu. But because GNOME is open-source, System76 now has the freedom to tweak the Pop OS to better serve its customers.

Overall, I would say Pop Os is the fastest Linux distro which I have ever used. Unlike Ubuntu, POP OS feels much responsive and trust me you never experience any system freezing issues. So, if you are a software developer who wants to write some code, then I would recommend POP OS without thinking of any.

Manjaro Linux is an open-source Linux distribution based on Arch Linux, providing all the beneﬁts of cutting-edge software. Unlike proprietary operating systems, you have full control over your hardware without restrictions.

This makes it ideal for users who want to learn how Linux works and how it is different from other operating systems. It is also best suitable for beginners, who want to try out the Linux for the ﬁrst time. One of the interesting things about Manjaro is that there are thousands of software applications in the software centre including full compatible equivalents of popular Windows software such as MS Ofﬁce.

When it comes to customization You don’t need any terminal to type the command to install any package, instead, Manjaro provides a graphical user interface to search & install a wide variety of themes to customize the look of the desktop.

Overall, I would say Manjaro is a unique arch dependent Linux distro which is user-friendly. From beginners to high-end users, anyone can use it without the need of getting confused.

Deepin OS is a Chinese based free Linux distribution which is a clone copy of mac OS. It has built on the top of Debian Stable branch, which means it uses an APT & Debian package mechanism to install the software programs.

Deepin OS looks completely different from GNOME or XFCE because It uses a Deepin Desktop environment built on the top of QT, an open-source UI tool kit used to build a graphical user interface. Deepin OS looks quite similar to modern macOS. Like Elementary and Zorin OS, it offers a dock, launch Pad, Notiﬁcation centre, quick previews and more.

Just take a look at the launch pad, the background blur effect reminds me macOS user interface. The default translucent effect you get to see throughout the system is amusing. For instance, take a look at the default settings application, which is designed in such a way that reminds the macOS control centre. Overall, I would say Deepin OS is a carbon copy of modern macOS & gives you satisfaction to the end-user in terms of design & performance.

Which Linux Distros do you prefer?

That’s pretty much its guys, these are the list of top 5 best & beautiful Linux distros of 2020. Let me know which is your favourite Linux distro & give me your suggestions by commenting down below.